Somewhere, there is an equally confused dog

A few months ago we acquired a lovely five-month-old calico kitten from the local shelter. When they notified us that she was ready to come home, they warned us that she had a slight respiratory infection (which soon cleared up) and also that she would be tender for a few da 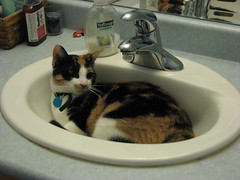 ys after her spaying operation.

What they did NOT warn us about, however, was that at some point during her stay in the shelter, some crazed scientist operated on her and swapped out her Cat Brain for a Dog Brain.

Seriously, this is the only way I can account for some of her behavior. The way she follows us around the house and lies at our feet wherever we go, for instance. Or how she shows little interest in being stroked, but loves it if you scratch and tousle her ears (after which she shows her gratitude by licking your arm ardently until you push her away). And whenever we go out as a family, she sits in front of the door and waits for us until we come home, so that the first thing we see on returning is a little cat face peering hopefully through the sidelight.

Snickers possesses only the most rudimentary sense of balance: when she jumps up on some narrow surface like the top of a chair, she either misses the mark entirely and tumbles back to the floor in a highly ungraceful sprawl, or she wobbles around for a few seconds and then falls off again.

She is convinced that the leg of our coffee table is her sworn enemy, and frequently wraps herself around it and kicks at it with all her might. And though she may seem to have some feline grace when you watch her prowling about the house, I have seen her stalk face-first into a doorframe on more than one occasion.

She is, in short, a complete dork.

Her favorite sleeping position is also something I have witnessed dogs do, but never before a cat: lying on her spine, with her front paws folded over her chest and her back legs splayed wide. I have frequently also found her curled up in the sink, or sprawled in the bottom of our bathtub—even when the porcelain was still wet from the last person who washed their hands or took a shower.

I would almost be worried about Snickers, except that she seems to be in perfectly good health, and capable of doing everything she wants to do. She's a beautiful, sweet-tempered creature, loyal and affectionate and amazingly patient with our children. But I can only conclude that she slept through all her classes in Cat School—so it's a good thing we plan to keep her indoors for the rest of her natural life, because I can't imagine she'd last two minutes in the ring with an Actual Cat...
Tags: cats, family
Subscribe
Previous
← Ctrl ← Alt
Next
Ctrl → Alt →
Previous
← Ctrl ← Alt
Next
Ctrl → Alt →