Serendipity is a word that sounds like it belongs in an Andrew Bird song, and that's fitting because that's exactly how I discovered his music.

A couple of weeks ago, I was struggling to write the final section of Touching Indigo and feeling like I needed a little boost of inspiration. So I decided to go hunting for pictures that reminded me of my characters. I'd never found a really good Faraday, despite combing numerous stock photo sites looking for males of the right age and coloring, so I decided to try something new. Where would I be likely to find a guy in his mid-to-late twenties with scruffy, badly cut brown hair, who had an interesting face but didn't look like a model or an actor? 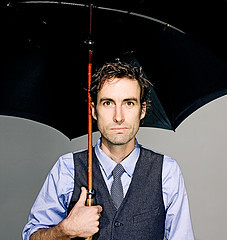 Aha, I said to myself, what I need is an indie musician.

So I went to Wikipedia and looked up their "List of Indie Musicians" and first of the solo artists on the list is some guy I've never heard of. I clicked on the link without much hope -- after all, what are the odds of finding someone who looked like Faraday after a mere two minutes' searching? But as soon as I made my way to Andrew Bird's MySpace page, I knew I didn't need to look any further.

Admittedly he's still slightly too conventionally handsome to be a perfect match for the Faraday in my head: more like Faraday crossed with Daniel Day-Lewis. But there are worse faults, to be sure, and I doubt I could find a better candidate even if I spent another five hours looking for one.

The fact that I fell in love with the first song of his that I listened to -- well, that was a bonus.

Andrew Bird's music is quirky, smart, and multilayered -- his most recent album Noble Beast, for instance, took me several listenings to really get a handle on, but after that I realized this was the kind of album I could listen to for the rest of my life. So I ended up buying The Mysterious Production of Eggs and Armchair Apocrypha as well, and I've been listening to them incessantly ever since.

If you're interested in hearing more from this artist, you could watch him perform six songs live in a cathedral, armed with nothing but a violin, a guitar, a loop machine, and his own whistling. Or check out some of my favorite songs on this playlist.
Collapse