First, let's watch a video. No worries, it's short. If you haven't seen it before, trust me, it's well worth watching; and even if you have seen it, I think it's worth watching again.

Right. Is your mind officially blown? I know mine was, when I first saw this and realized just how unimaginably huge VV Cephei is compared to… well, basically everything else in the clip, and yet how that single star is only one among countless others in this vast universe. I mean, space is big. Really big (thank you, Douglas Adams).

Which leads me to another video narrated by Carl Sagan entitled "Pale Blue Dot", which many have found to be similarly astounding and moving:

(Or if you're tired of watching videos you can just read the text of the monologue instead.)

What interests me about Sagan's monologue is that so much of it is undeniably true – and yet there's one crucial point on which I would have to disagree. Sagan, as many others have done before and after him, looks at the sheer inconceivable size and scope of the universe and comes to the conclusion that it is simply too big, and we are simply too small by comparison, for us to believe that our lives have any higher purpose, or that there is a God who cares about us.

To which I say, wait, what?

So while I view the video about the relative size of stars with open-mouthed awe and a chill running up my spine at the unbelievable immensity of it all, and while I am also moved by Carl Sagan's appeal for human beings to be good to each other because our world is so tiny and so alone, I can't mistake either of these things as evidence that there is no God, or that God is too big to be bothered with the needs and struggles of puny human beings.

Which means I can watch those videos about the immensity of the universe and the apparent insignificance of the Earth and humanity in the cosmic scheme of things, and then, with no sense of irony or self-contradiction, I can tuck my children into bed and sing to them:

Jesus loves me, this I know,
For the Bible tells me so;
Little ones to Him belong,
They are weak, and He is strong. 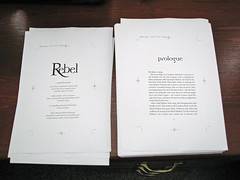 First Pass Pages - Rebel
Originally uploaded by rj-anderson
I just got my first pass pages for Rebel today from my UK publisher! It's so exciting to see my manuscript all typeset and laid out like a real book!

Now I just have to get my copyedits on the US edition (Wayfarer), so I can cross-reference the two and make sure that the text of both editions ends up being more or less the same...

And speaking of the UK and the US, I am delighted to announce that the Seven, a group of talented debut authors of which I am honored to be a part, is offering SEVEN FREE BOOKS to two lucky winners!

All you have to do is pop by the contest site starting tomorrow, July 1, and give us your name, your e-mail, and whether you'd prefer to win the US or the UK editions of the books. Yes, it really is that easy! So visit the Summer of Seven site today!