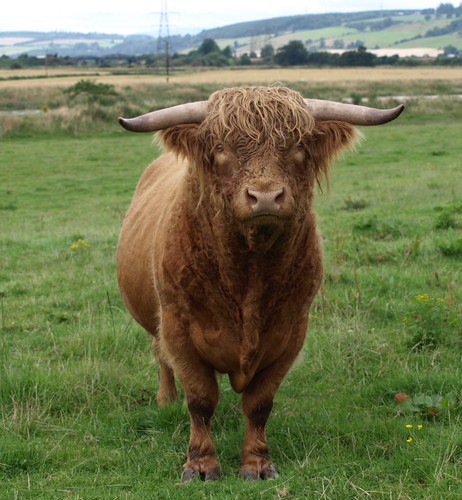 My 3-year old son, whom I like to call Pollywog, is obsessed with bulls.

This is not some fleeting fancy, either. He's been completely bull-crazy for over a year now. Pictures of bulls, plastic bull toys, stories about bulls (and aside from the legendary The Story of Ferdinand, there really aren't too many), cartoons involving bulls (he must have watched "Bully for Bugs" and "Mickey's Rival" about a million times each on YouTube). He calls Cars "the movie with the bull combine". And although he seems to have mostly dropped the habit now, he used to crawl around butting people (gently) with his head and snorting whenever he got the chance.

This is not a hyper-aggressive kid we're talking about, either. For the most part he's gentle and sweet-tempered, amazingly empathetic for his age. But he's also the youngest of my three boys, the oldest of whom (at 8-going-on-12) is literally twice his size. Maybe, I think to myself, imagining himself as a big powerful bull makes him feel less small and vulnerable?

In any case, it's a charming little quirk of his and I don't mind indulging him in it, though I have drawn the line at taking him to Pamplona (I don't think he'd enjoy a real-life bull fight anyway, because the bull doesn't exactly win that battle).

So what I'm wondering is, aside from the aforementioned Ferdinand and Bugs Bunny cartoons, can any of you think of other child-friendly media involving bulls?
--
Bull photo is by Brian Forbes on Flickr and is used in accordance with his Creative Commons license.
Collapse